Ayeza Khan is a Pakistani actress known for starring in several television drama serials. She started her acting career in 2008 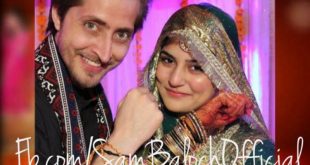