The list of Top Ten Beautiful Turkish Actress of Turkey who have become influential and fabulous celebrities among the peoples of Turkey as well as in all over the world by playing varied excellent roles & characters in the most popular television series as well as movies for which they were awarded accolades against their outstanding performance and attractive personalities in the TV serials and films. 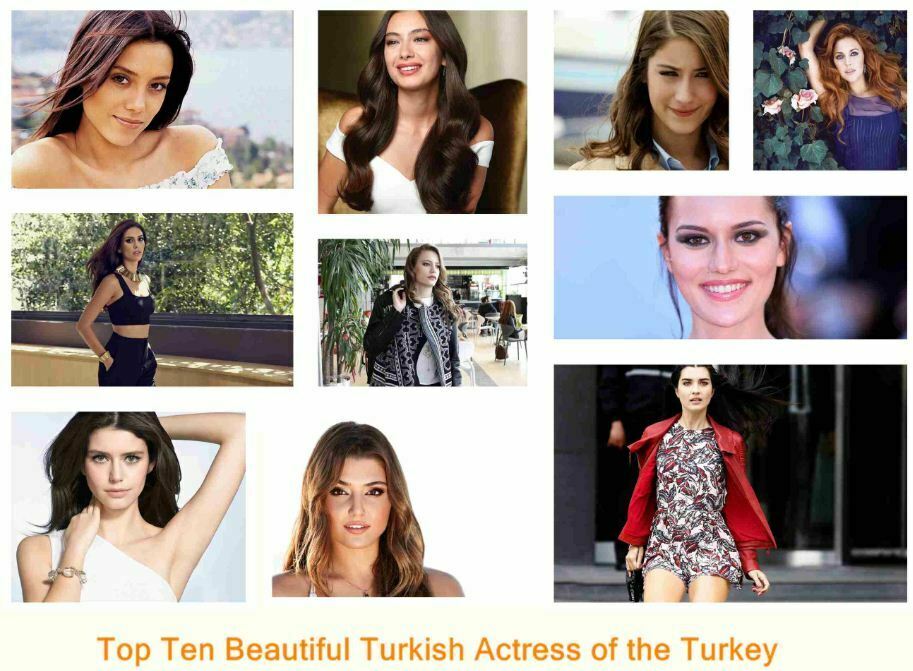 Meryem Uzerli is one of the Top Ten Beautiful Turkish Actress. She is a famous Turkish-German actress as well as a model who rose to eminence by playing Hurrem Sultan in the Turkish TV series Muhtesem Yuzyil, for which she received significant acclamation and won numerous awards including Golden Butterfly Award. Uzerli was born on 12th August 1983  and raised in Kassel, age 35 years. She made her performing debut with minor parts in Berman productions. She appeared in the television series Notruf Hafenkate and EinFall Fur Zwei in 2010. She is also renowned for her roles in German films like Journey of No Return and Jetzt Aber Ballett in 2010. She played various roles in TV serials by showing ability and capability in the world of acting.

Neslihan Atagul is a beautiful Turkish actress born on 20th August 1992 at Istanbul, Turkey, age 26 years. She is learning at Yeditepe University to get a degree in Theatre. Her father is of Circassian descent while her mother is of Belarusian descent. During her childhood, she desired to become an actress. At the age of 13, she took part in the movie IIK Ask. She played excellent roles in various TV serials by showing capabilities and abilities in the field of acting such as Kara Sevda, Senden Bana Kalan, Fatih Hargiye, Hayat Devam Ediyor, Arfa, Yaprak Dokumu etc.

Serenay Sarıkaya is a Turkish actress and model born on 01st July 1991 in Ankara Turkey, at age 27 years. She resided with her family in Antalya until the age of 07 when her parent separated.  In the age of 15, she participated in a beauty competition and received a special award from the jury. She later rose to eminence by acting in the cinema movie Plajda in 2008. She made her acting debut with a minor part in the movie Saskin in 2006. She became the first runner-up at Miss Turkey in 2010. Sarikaya came to international attention for her roles in Lale Devri and Medcezir 2010-2015 and got critical acclaim and won numerous accolades including Golden Butterfly Award. She was also chosen as the woman of the year by GQ Turkey in 2014.

Hande Ercel is a Turkish television actress and model born on 24th November 1993 in Bandirma, Turkey, age 25 years. Ercel is acknowledged for her lead role in Ask Laftan Anlamaz as Hayat Uzun – Sarsılmaz, opposite Burak Deniz as Murat Sarsılmaz, first love Hande Ercel and as Selin Yılmaz – Mertoglu in Gunesin Kızları. She also played the role of Hazel in Siyah İnci on Star TV. She is one of the famed Top Ten Beautiful Turkish Actresses who has played various roles in a variety of television series and gains popularity among the people in Turkey.

Cansu Dere is very popular and fabulous Turkish film and television actress, model, and beauty pageant runner-up. She was born on 14th October 1980 in Ankara, Tukey, age 38 years. Her family was Turkish immigrants from Greece and Bulgaria. After completing graduating from the Department of Archaeology from Istanbul University, she made her debut in both cinema and television at the beginning of 2004. She played excellent roles as Sila in the Sila Series with Mehmet Akif Alakurt between 2006-2008. She played remarkable roles in television series and films such as Defne with Kennan Imirzalioglu in the film The Last Ottoman, Aci Ask, and Eysan in the television series Ezel.

Fahriye Evcen is one of the popular Top Ten Beautiful Turkish Actresses. She is best known for her roles as Necla Tekin on Yaprak Dokumu based on the novel by Resat Nuri Guntekin, and as Feride in the TV series Calıkusu, based on the novel by Resat Nuri Guntekin. She was born in Solingen, Germany on 04th June 1986, at age 32 years. Her maternal family is Circassians while her paternal family is Turkish immigrants from Kavala, Greece. She participated in Oya Ayogan’s program and introduced Evian in young age during vocations in Turkey. During studying sociology at Dusseldorf Heinrich-Heine University, she was offered to work on a TV series as an actress. She revealed the character of Necla on the TV series Yaprak Dokumu. She has her first cinematic debut with the movie Cennet which was released on 11th April 2008.

Berguzar Korel is a beautiful Turkish Actress born on 27th August 1982 in Istanbul, Turkey, age 36 years. Korel is the daughter of actor Tanju Korel of Circassian descent and actress Hulya Darcan who is of Albanian descent. Korel made her debut as Leyla in Kurtlar Vadisi. She came to extensive consideration after starring as Sehrazat Evliyaoglu in Binbir Gece. She came in view in Magnificent Century as a guest role of Monica Teresse for one episode (total episode 24). She started as Feride Sadoglu Alongside Kenan Lmirzaliogluin the popular series Karaday in 2012. She has been awarded the Golden Butterfly Awards for best actress in 2007 and 2013.

Beren Saat is a Turkish actress born on 26th February 1984, age 34 years, and raised in Ankara, Turkey. From the beginning of her career, she has received significant acclaim and numerous awards for her acting. During the study at Baskent University, she participated in the acting completion Turkiye’nin Yildizlari and was discovered by Turkish directed tomris Giritlioglu launching her proficient acting career. Saat made her acting debut with a minor part in the television series Askimizda Olum Var in 2004. She was prepared by Tomris Giritlioglu for her first Major role in Aska Surgun 2005-2006. She performed remarkable roles and characters in numerous television series. She was the highest paid beautiful actress in Turkey from 2008 to 2014.  She has also participated in several movies as a voice actor. She was named actress of the year in the “2010 Damgasini Vuranlar” published by newspaper Radikal.

Kaya was born in Istanbul, Turkey on 01st October 1990, at age 28 years. She graduated from Liceo Italiano Di Istanbul in 2009. She is currently continuing her further studies. She was introduced to the art and acting world at a very young age and she took ballet and violin lessons for 07 years as a child. Kaya started her acting career in 2007 with TV series. She played in the first two seasons of TV series in 2011. She played beautiful roles and characters in various series such as Adin Feriha Koydum, Son Yaz Balkanlar, Maral En Guzel, and the American TV series Shameless. She is one of the highest-paid actresses in Turkey. She has been granted the medal of International Excellence in the category of artists. According to the results of a survey conducted on the United Emirates-based MBC channels which ranked Turkish series and special programs, she ranked 04th on the list of most admired and beautiful Turkish women artists. She was also the only Turkish recipient of the “Lebanon Awards 2015”

Tuba Buyunkustun is a Turkish actress, extensively well-thought-out as one of the most beautiful Turkish actresses. She was born on 05th July 1982 at Hatice Tuba Buyukustun, age 36 years. She is also the recipient of several awards, including five Televizyon Dizisi Awards. She is one of the Top Ten Beautiful Actresses of Turkey most as well as the highest-paid actress.  Buyukustun’s parents are from Erzurum. However, her grandparents are Turkish immigrants. She studied costume design and stage decoration at the Mimar Sinan University. She made her television series debut in 2003 on the last four episodes of Sultan Makam directed by Aydin Bulut and broadcast on Channel-D. She played very excellent roles in various television serials such as Cemberimde Bul Oya, Bulizar, Ihlamurlar Altinda etc. she was nominated for the 42nd International Emmy Award for Best Actress.