Images of Nadir Ali Famous YouTuber with His Wife Faiza 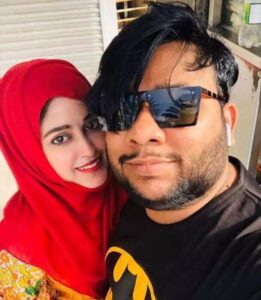 Nadir Ali is a famous  Pakistani comedian, YouTuber, and content developer known for his prank videos. Nadir Ali has his own YouTube channel, “P 4 Pakao,” which is one of Pakistan’s most popular YouTube channels. Nadir has a million subscribers on his YouTube channel. He thanks his outstanding content Because of her own hard work and diligence.  Nadir has proven himself among the audience.

Nadir Ali’s Wife Name And Pictures With his wife

Nadir Ali married a woman named Faiza in 2017. Faiza was a tremendous admirer of Nadir, so they connected over social media and get married.  Nadir is very active on social media, and on also his official Instagram account.  He frequently shares photographs of her daily life with his admirers and followers. Recently Nadir Ali Shared his pictures with his wife.  Look at the beautiful photos of Nadir and his wife we have collected pictures for you!

Pictures Gallery of Nadir Ali With His Wife: